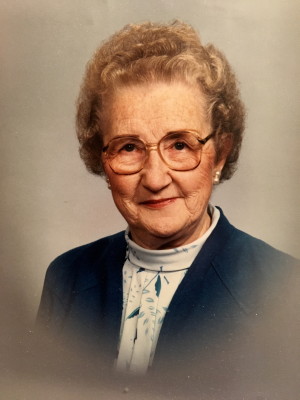 Verna was born June 1, 1915 on a farm near Ohiowa, Nebraska, the second child and oldest daughter of Amanda and Henry Meyer.  Verna passed away on March 22, 2019.  She was baptized and confirmed at St. John’s Lutheran Church in Ohiowa.  She attended country school until she graduated from 8th grade.  The following fall she convinced her parents that she was needed at home to help care for the new baby sister soon to be born.  Verna worked very hard on her parents’ farm helping in the fields, in the kitchen, and caring for that little sister.  A few years later she worked in several homes as a hired girl/maid.  When she was 16 she fell for tall, dark and handsome Ernest Chudly who she met at a local dance. On June 1, 1940, she and Ernie were married in Leigh, NE and settled in Milligan.  Later they welcomed 2 daughters into their home, Virginia and Dianne.

When the family moved to Lincoln in 1956, Verna worked in food service at the UNL’s Student Union, loving the students she worked with.  Shortly after moving the family joined Our Saviour’s Lutheran Church.  In 1960 Ernie and Verna bought their first home, a fixer-upper on South 35th Street.  Before the year had passed Ernie died suddenly and Verna was left with a new mortgage and two teenagers.   After 20 years at the Union, she retired.  She enjoyed caring for her home and yard, raising tomatoes in the summer and making quilts with the church ladies. Verna loved her sons-in-law Earl Ahlschwede (deceased) and Jack Keech as if they were her sons.   When her grandchildren came along she was so happy, first two granddaughters, then three grandsons.

Verna was a kind and loving mother and grandmother, neighbor, and friend.  She was resourceful and helpful, always the problem solver.  She was a beloved grandmother, maker of donuts and fried chicken, who let her granddaughters stay up and watch Johnny Carson when they stayed with her.  She visited her grandsons in Grand Island often when they were little, arriving on the bus with candy bars in her purse for them.  She made at least four kinds of pie for every family get together and much homemade candy at Christmas.

In 2002 she welcomed great grandson William, followed by Andrew, Peter, and George.  She thought they were all perfect.

Verna lived alone in her home until she was 101 years old, then moving to Sumner Place where Larry Van Hunnik and his staff cared so lovingly for her helping her to live out her life’s journey with dignity and respect.