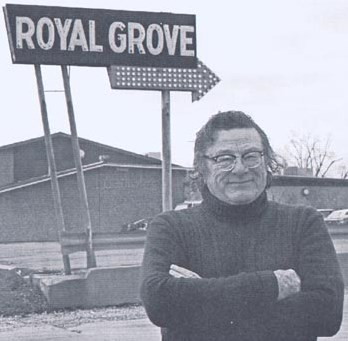 Tommy Jelsma was born July 30, 1927 in Lincoln, NE to Harold and Elizabeth (Toody) (Brown) Jelsma.  He was 90 years old and died peaceably at his home on Sunday December 17, 2017.  He is preceded in death by his parents Harold and Toody Jelsma.  He is survived by his wife Norma (Hawkins) Jelsma; daughters Connie Jelsma and Kimarra (Kim) Jelsma Elam; grandchildren James Vicars, Michael Vicars, Tyler Miers and Ashley (Miers) and John LaRosa; cousins Robert Brown and Fred Brown.

Tommy and Norma were married in Denver, Colorado on Nov. 6, 1947.  They enjoyed 70 years together.

Tommy was the owner of the Royal Grove Nite Club.  The club has roots that go back to prohibition and The Brown Derby, a downtown Lincoln speak-easy operated by Jelsma’s grandfather, Henry Brown.

The original Royal Grove was built in the village of West Lincoln in 1933 by Henry and Christina Brown. In 1938 the business was carried on by their daughter Elizabeth (Toody) and her husband Harold Jelsma. In the early years, the Grove was a beer tavern that specialized in pan fried chicken.

In 1960, the business was leased, but in 1964, reverted back to the Jelsma family.  Toody and Harold managed the business until 1966 when their son Tommy took charge of it.  In 1967, local liquor laws were passed that made it possible to sell mixed drinks and wine along with beer. That same year, the Grove was relocated to on West Cornhusker Hwy.  Local rock and roll bands were the featured entertainment. The building has since expanded from 2,000 sq. ft. to its present size of 16,000 sq. ft.   Tommy made a dream of his come true.

In 1998 Tommy was inducted into the Nebraska Rock and Roll Hall of Fame.  He and wife Norma were also recipients of Sertoma’s Appreciation Award for Service To Mankind.

In 2013 Tommy and his wife Norma retired and the Royal Grove was closed.  Tommy enjoyed retirement and spending time with his family and working on his ranch.

Private service.  No visitation.  In lieu of flowers, the family will donate memorial gifts to Tommy’s favorite charities: Capital Humane Society Spay & Neuter Program, Lincoln Animal Ambassadors or the Nebraska Wildlife Federation.   Make check out to Norma Jelsma and mail it to Aspen Cremation Service, 4822 Cleveland Avenue, Lincoln, NE 68504.  Write “Jelsma” on the outside of the envelope.