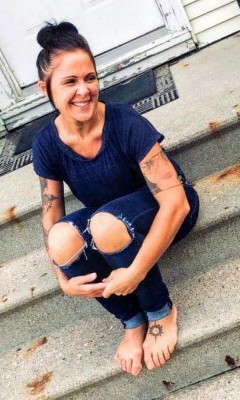 Tina Marie Rogers, 43, passed away unexpectedly in her home on April 10, 2022. Tina was born in Loveland, Colorado on September 12, 1978, to William J. Rogers Jr. and Cindy (Miller) Rogers. She graduated from Northeast Highschool and lived in Lincoln most of her life. Tina was a devoted mother to four children, Jasmin Rogers, Brent Moger, Paige Moger, and Gemma Rogers-Abbott. Tina gave her life to the Lord on Easter Sunday of 1997, 25 years ago, and has been a faithful follower of Jesus since that day. Tina was very creative and ambitious, starting her own business called Fuel House, where she created nutritious snacks and sold them under this name. Tina also ran her own daycare in her home where she provided loving care to several children. Providing a safe, educational, and encouraging environment to these children was her passion.

Tina attended Mercy City Church regularly and considered the people there part of her family. She was also involved in Global Dominion Ministries, an on-line ministry out of Africa. One of Tina’s dreams was to return to Colorado. She and her family made yearly trips to Colorado, but she finally fulfilled her dream by moving back to Colorado in 2020. Shortly after her move, Tina’s mother became seriously ill and Tina gave up her dream and returned to Lincoln to help care for her.

Tina has touched many lives, as the family has been made overwhelming aware of since her passing. So many people have contacted us to speak of how she made a difference in their lives. Tina was beautiful both inside and out. We will remember her for her smile, her laughter, but mostly for the love she brought into our lives that will stay with us forever.

Memorials to Tina’s Children. Donations may be made here.

“One thing I ask from the LORD, this only do I seek: that I may dwell in the house of the LORD all the days of my life, to gaze on the beauty of the LORD and to seek him in his temple.” -Psalm 27:4