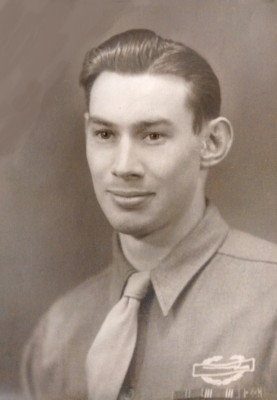 SD grew up and lived most of his life in Dix NE. After graduating from Dix High School during WWII, he volunteered to join the army in June 1943. He attended boot camp in Colorado and California. After bootcamp he spent a period of time in New York before traveling to England to prepare for landing in France on July 14,1944. Between January 8 & 14, 1945 he was wounded by German artillery fire. In a letter home to his parent’s dated January 20, 1945 he had spent 145 days on the front line with 14 days in combat before being shot (wounded). At the completion of the war in the European theatre he was honorably discharged from the US Army and received the Bronze Star and Purple Heart. He attended Kearney State College before returning to Dix to become postmaster. He married Lenora Irene Cole and they spent their lives together in Dix before moving to Lincoln in their later years to live closer to their son and youngest grandchildren. SD enjoyed cars, hunting, wood work (making sawdust), playing BINGO, watching reality TV, and occasionally would dance to lively music. His long stories and tall tales will be missed by all.