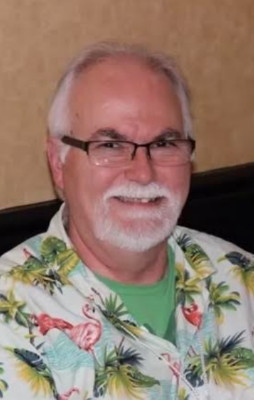 Scott H. Colborn, 68, passed away on Monday, March 30th, 2020. He is survived by his children, Melissa and Asher Colborn, his brother, Craig Colborn, nephew Jon Colborn, and many, many friends. A celebration of life will be scheduled at a later date.

Scott was born in Lincoln on November 11th, 1951 to Robert and Gentry (Hobson) Colborn. Scott was a people person, it didn’t matter whether you were acquainted or not. He could be very goofy – he loved to have fun. He got that from his mother. Scott’s signature outfit (worn daily) was a Hawaiian shirt, khaki shorts, socks, and Birkenstock’s. You’d never find him in anything else. Scott didn’t have a mean bone in his body; he was always looking for the positive in any situation.

Scott loved music – he started playing guitar as a young teenager in various bands and ended up teaching it full time to anyone who wanted to learn or hone their guitar skills. When he wasn’t playing guitar, Scott loved to sit down with a good book and a hot cup of coffee. He was a big reader and was always making trips to the local library to pick out new true crime/mystery novels to read (a habit that was passed on to his children).

Scott was also a very inquisitive person; he loved exploring unexplained phenomena and hosted a radio program by that name on KZUM for 40 years. He was the face of The Ghosts of Lincoln Bus Tours that he and his daughter Melissa facilitated each fall and was always excited when someone told him their ghost story.

During the 70’s and 80’s, Scott was a successful real estate broker and would often joke that he was “broker” than most. He was constantly cracking corny jokes to make people smile.

Scott re-discovered his spiritual side many years ago and began learning under various spiritual teachers. He and his then wife, Kathryn (Kate) Colborn, opened a new-age music and book store called The Way Home, which opened the door to many lasting friendships. Years after the store was closed, he began attending his home church, Westminster Presbyterian, once more and eventually became a Deacon there; church and fellowship were very important to him. However, nothing in his life was more important to him than his children. He would do anything for them.