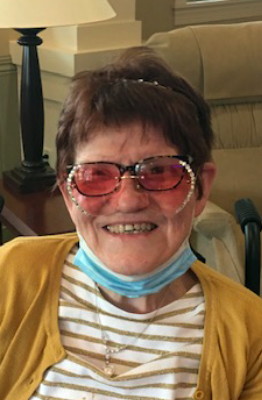 Pauline Moira Hoffman peacefully passed away in her sleep, August 24, at her home in Tabatha’s Good House, Lincoln, Nebraska. She was a treasured resident at Tabitha since 2020.

Pauline, known to her many friends and caregivers as Polly, was born in Henderson, Nevada and, with the rest of her large family, lived in many different places around world, including Japan, Arizona, and Florida. She moved with her parents to Omaha, Nebraska as a teenager and then with them to Chadron, Nebraska as an adult. In Chadron, she enjoyed working with friends at a work center. After death of her parents in 2006, she moved to Lincoln where she was cared for and supported by Region V Services until she moved to Tabitha.

Polly was born with cerebral palsy and raised and educated at home by her caring parents Kathleen and Ted. She was happily surrounded by her large family and enjoyed their many outings and adventures. She was always outgoing and friendly and made new friends wherever she lived.

Her many friends will remember her for her wholehearted nature, her beautiful red hair, and especially her sense of style, which included lots of fabulous animal prints, sparkly jewelry, head bands for every occasion, colorful nail polish, and her brightly colored wheelchair.

Polly was the beloved sister of Kate Hoffman, Susan Hoffman, Peter Hoffman, Bruce Hoffman, Samantha Hoffman, and Scott Hoffman, as well as many nieces and nephews who deeply loved her.

She was preceded in death by her deeply loved parents and brothers Michael, Jim, and Mark.