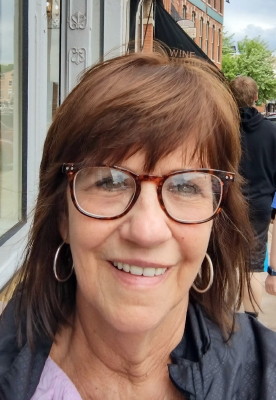 Pamela Gale (Hardy) Knapp passed on December 17, 2022 surrounded by her three sons and other loving family members. Undoubtedly, she also felt the love of the numerous family members and friends that visited her and prayed for her in her final days.

One thing is for certain: Pam cared.

She dedicated much of her life to caring for others and sharing her love in both small and immense ways. She lived many years of her life in Peru, Nebraska, because she wanted to look out for her parents and her grandmother. She did so because she cared.

She made a career out of working at the elementary schools in Peru and Auburn, Nebraska, so that she could positively impact the community youth and effectively parent her three sons during the school year while being able to spend quality time with them during the summer. She did so because she cared.

She was a constant source of support for her siblings, cousins, nieces, and nephews, and she worked diligently to make sure the entire extended family stayed connected. She was always on the hunt for a card or small gift for family or any member of her huge network of friends, just to let them know she was thinking of them. No Christmas ever went by without her sons’ stockings being filled to the top. She was always the first to offer a smile and a goofy joke or a hug and a shoulder to cry on as we needed it. She did all these things because she cared tremendously.

It is with the deepest sadness that we announce Pam’s passing, but we are consoled knowing that she has been reunited with her heavenly family.

Pam was born on July 8, 1957 in Auburn, Nebraska to parents Fred and Joan “Polly” Hardy. She spent time growing up in Fremont, Nebraska, and Peru, Nebraska, and graduated from Auburn High School.

After high school, Pam worked a number of tough jobs. In the earlier days, Pam, her mother, and her grandmother, Lola Mertes, ran the VFW club in Peru. Later she moved around a bit and worked at jobs such as Trails End, a sewing factory, Commercial Federal Bank, and Nebraska City Bank.

Pam eventually returned to Peru, where she began working at Peru Elementary School and raised her family. After the closing of Peru Elementary, Pam was transferred to work at multiple other schools within the Auburn Public School district, from where she would eventually retire after many years. She found much fulfillment in her career with the school district from caring for all of the kids in the community and working with amazing coworkers and friends with whom she stayed in contact for life.

Upon retiring from the school and having raised her sons to adulthood, Pam’s next big milestone was to move to Lincoln, Nebraska. She had long aspired to travel more, one of her great joys, and she followed through on that dream. Her annual trips to the beach in Florida and her trips with her friends to the lake truly enriched her life. Pam continued to work after retirement so she could finance all her adventures with her boys, cousins Devy and Phil, Cristy and Bud, Kathy, many other family members, and all of her wonderful friends. “You gotta do what you gotta do” as she would say, so off she went to work at Walmart, Crete Carrier, and finally Edward Jones. She made great friendships at every stop.

In her free time, Pam loved doing crafts. She especially enjoyed her Tuesday craft nights with Devy and Hadlee. Everyone who knows her likely recalls the years of work she put into her Halloween village, which she started displaying at her schools and has displayed year-round in her basement since she retired. It has been enjoyed by many. When Covid hit, she went right to work sewing masks for anyone who needed one. Her holiday baking was also always superb.

Pam returns home to be with her father Fred Hardy (January 24, 2002) and her mother Joan “Polly” (Mertes) Hardy (January 27, 2013). Her grandmother, Lola Mertes, uncles Ron and Jerry Mertes, and aunt Barbara and uncle Tom Cruikshank also preceded her in death.

It is difficult to make any sense out of the sudden loss of such an incredible mother, loyal daughter, loving sister, supportive friend, and all-around beautiful person. Yet, as Pam would frequently say, “Everything happens for a reason.” As we search for meaning in this tragic event, perhaps one thing we can take away from it is to live life a little more like Pam lived hers. If we all care a little more and love a little harder, we can’t go wrong.

Pam, you are so loved and will be forever missed.