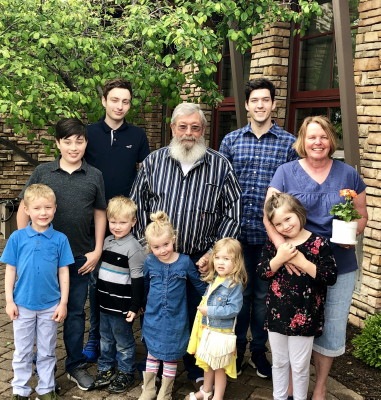 Norman Michael Myers was born on August 13th, 1952 in Sioux Falls, South Dakota to parents Blair D. Myers and Rosaria W. Myers. He was the third brother in the family of six boys. He passed away on December 14th, 2019 at Bryan East hospital surrounded by his loved ones.

He spent the majority of his childhood in Cherokee Iowa. After graduating from Washington High School in Cherokee, Norman started working with Capital Contractors-Bridge Division, building bridges throughout the Midwest. He worked his way through the ranks of the crew to become a crane operator, and then a Superintendent. He was well known for his strong work ethic, having the reputation for being the first one on the job site and the last one to leave. After 45 years in the industry, he retired from Cramer Associates in 2018, at the age of 66.

Norman had various hobbies that he enjoyed in his free time, including riding his Harley Davidson, attending several motorcycle rallies over the years. He and his son Blair rode to the Sturgis S.D. bike rally twice. He loved attending auctions hunting for treasures as he was an avid collector.

Norman was famous among family and friends for his meat smoking and barbecuing abilities, having collected several different grills and smokers over the years. His ribs made any Husker Party a win regardless of the final game score.

He was well known around the community as Santa. Every December Norman would volunteer for private, community and family events to be the big jolly man in the red suit helping keep children’s imagination alive.

He and his wife Lynette enjoyed the outdoors while camping in their R.V.. One of Norman’s favorite past times during retirement was being the Camp Host at Branched Oak lake during summer of 2018.

Norman’s most enjoyable life moments are when he was having fun with his eight grandchildren. Whether he was teaching them how to be an expert camper or they were teaching him how to use electronics, the experience was always joyful and mischievous for everyone involved.

Norman is preceded in death by his father, Blair Myers, his in-laws, Bob and Pauline Roberts, his son-in-law Chris Bosket, and his grandson, Tyler Bosket.

Deceased’s funeral arrangements: Celebration of Life to be announced at a later date. In lieu of flowers, memorials may be sent to the family for charitable donations.  Condolences may be posted by using the form below.