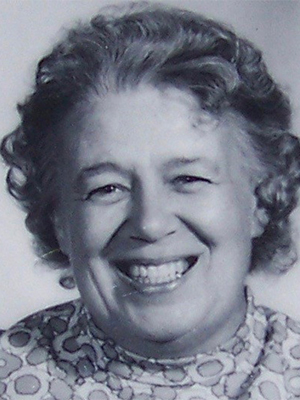 Margaret Lucille (Fishell) Heslop was born during an ice storm in Grand Ledge, Michigan, on April 15, 1921. She joked that people celebrated her birthday by paying taxes to Uncle Sam. She died November 25, 2017, in Lincoln, Nebraska.

The eldest of four children, she attended elementary school in Grand Ledge and received her high school diploma from Cedar Lake Academy. She attended Emmanuel Missionary College (now Andrews University) in Berrien Springs, Michigan, prior to joining the military in 1945. She served in the US Navy (WAVES), completed basic training in the Bronx, and was stationed in San Francisco during World War II. She was discharged in 1946.

During her career she worked as an executive assistant for the Eaton County Clerk (Charlotte, MI), the State of Michigan (Lansing), the Studebaker-Packard Corporation (Detroit), the Michigan Conference of Seventh-day Adventists (Lansing), and the culmination of her career was serving as a personal secretary to Dr. Karl Menninger, founder of the Menninger Foundation in Topeka, Kansas.

She married Earl W. Heslop on September 11, 1960, and had one daughter, Kristin Ann Heslop. During her husband’s pastoral career with the Seventh-day Adventist Church, the family lived in Carlisle, Scranton, and Sharpsville, Pennsylvania; Muncie and Bloomington, Indiana; Topeka, Kansas; and Shelby, North Carolina.

She was an accomplished pianist and organist, and served as a church musician in the Lansing Seventh-day Adventist Church, the Sharpsville (PA) Seventh-day Adventist Church, and the Unity Church of Topeka, Kansas. A lover of classical music, she had a great appreciation for JS Bach and Mozart. She was a connoisseur of the English language and she loved books, especially those of Erma Bombeck and Madeleine L’Engle. She was an excellent seamstress and for much of her life, she loved clothes and fashion. She also loved to cook, and was known for her homemade wheat germ bread and granola cereal. She loved to travel, and took great pride in reminiscing about her two trips to Europe and the Middle East.

She was preceded in death by her parents (Lyle Fishell and Anna L. Bumgarner Fishell), two brothers (Richard Fishell and Robert Fishell), and her husband Earl W. Heslop. She is survived by her daughter Kristin Heslop of Lincoln, and brother Russell Fishell of Sun City, Arizona, and many nieces and nephews.

Cremation. No visitation. Service in the future.