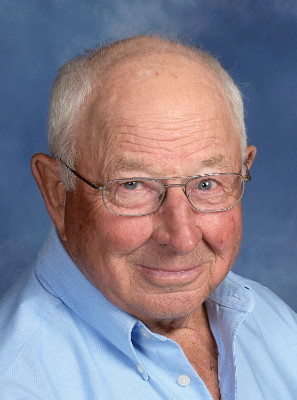 Everyone thought Louis George Rosman would live forever. He’d survived polio, various types of cancer and several serious farming accidents that should’ve killed him, including a flipped bulldozer that broke his arm. At 93, he was already looking forward to turning 100. But on Monday, July 17, 2022, Louis went home to God — surprising his family, who thought he’d be driving the Uni-Loader on his farm in Harlan, Iowa for at least another few years.

Louis was born on February 10, 1929 to Carl and Mamie (Buman) Rosman. The youngest of four children, he never lived more than a half-mile away from the house where he’d been born. He attended Harlan Public Schools and graduated from Harlan Community High School in 1946, at a time when most farm kids dropped out after eighth grade.

After high school, Louis became the third generation to farm his family’s land, which had been homesteaded by his maternal grandfather after immigrating from Germany in the late 1800s. Louis dedicated the next seven decades to mostly livestock farming. Up until his recent stint at Brookestone Village — a rehabilitation center in Omaha, Nebraska — his longest time away from the farm was when he contracted polio in his early 20s. He was treated at Mercy Hospital in Council Bluffs, Iowa, where he met Irene Elizabeth Kloewer, a nurse at the facility.

Irene was one of eight children, and at first, Louis was overwhelmed by her loud and boisterous clan, preferring to sit quietly during their Sunday dinners. But they warmly welcomed him into the family. On October 2, 1954 — with the blessing of her parents Peter and Elizabeth “Lizzie” Kloewer — Louis and Irene were married at St. Peter’s Catholic Church in Defiance, Iowa.

They had eight children, sadly losing their youngest daughter, Mamie Elizabeth, in infancy. Every Sunday, they attended mass at St. Michael’s Catholic Church in Harlan, Iowa — where Louis had been baptized and remained a lifelong parishioner — followed by frequent dinners with the Kloewers, where the Rosman children were doted on by their aunts and uncles and played with their many cousins. Louis and Irene had just celebrated 51 years of marriage when Irene died at age 72 on October 3, 2005 — a day after their wedding anniversary.

Even after “retiring” from farming, Louis didn’t slow down. Known for his exactitude, he liked things to be done just so and preferred to do the work himself. He enjoyed fixing objects that most people considered trash, from old farming equipment and furniture to children’s wagons and bicycles. In his free time, he repurposed barnboards into wren houses and devoured novels by his favorite author, Nicholas Sparks, which he checked out from the Harlan Public Library. He lived off all things microwaveable, including pre-cooked bacon and grilled burgers, along with frozen fruit pies and Blue Ribbon ice cream that he bought by the gallon. He could drink black Folgers coffee until 10 p.m. without it disrupting his sleep.

He was an avid fan of the card game, Hand and Foot, and never missed the Red Cross Blood Mobile when it was in town. He donated 10 gallons of blood, one pint at a time. In his later years, Louis often joined his cousin, John Buman, on his trucking routes across America, traveling thousands of miles in the passenger seat of John’s rig. When the coronavirus pandemic began in March 2020 and stopped these trips, Louis turned his attention to politics. He staked campaign signs in his soybean field bordering the highway and protested the new “carbon capture” pipelines proposed in Iowa. He was active until the very end and lived independently through his final years.

A funeral mass will be held at 11 a.m. on Saturday, August 27 at St. Michael’s Catholic Church in Harlan, Iowa. A rosary will be held at 9:30 a.m., followed by visitation at the church with family at 10 a.m.