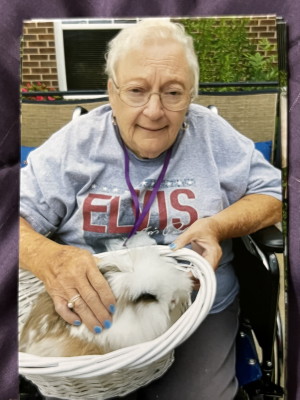 Linda Kay (Chaney) Woolsey, of Lincoln, formerly of Wymore, passed away at Bryan East Hospital, in Lincoln, on November 13, 2022.

Linda was born October 10, 1945 to Earl and Esther (Schultz) Chaney, in Beatrice. She spent her childhood years in Wymore and graduated from Wymore High School in 1963.

On September 28, 1963 she married Larry Francis Woolsey and from that union they had a son, Brian and a daughter, Tammy. During the early years of the their marriage, they resided in Lincoln and also Garland, Nebraska, before moving back to Wymore. Linda worked a the Beatrice State Developmental Center and for many years at the Good Samaritan Center in Wymore, where she was first a cook and then the Dietary Manager until her retirement. Upon retirement she moved to Lincoln, where she was closer to her children, grand-children and several friends.

Her hobbies included, Elvis, cooking and baking for her family and others. There wasn’t a grocery store she couldn’t spend hours in. She also loved going to her children’s school events and when her children were grown, she had her dogs and cats along the way to take care of.

She is survived  by her children, Brian Woolsey(Lisa Robertson) of Lincoln, Tammy Woolsey (Todd Packett) of Marysville, Kansas; by two grandchildren, Gage Woolsey of Lincoln and Sierra Woolsey of South Daytona, Florida;   by her beloved Bulldog, Wrigley Field Woolsey; by a sister-in-law and brother-in-law Betty Jo (Woolsey) and Dale Marples, of Omaha;  by a brother-in-law, Melvin Andrews of Wymore; by four nieces and one nephew.

Linda was preceded in death by her parents Earl and Esther Chaney, by her husband, Larry, March 3, 1982, by her sister, Charlotte Andrews, by many pets that she has missed, NickNack, Gidget, Bogie, Max, Addi, Bailey and Napoleon the parakeet