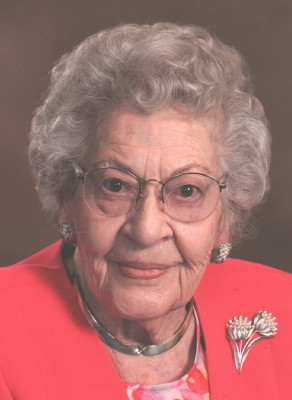 LaVerne was born March 3, 1922, the youngest of eleven children of Charles and Anna Turner in Trumbull, NE.  After graduating from Trumbull High School, she trained at Mary Lanning School of Nursing in Hastings, NE.  In 1944 she married Cyril Bish of Giltner, NE, her husband of 62 years. She also entered the Nurse Corp of the U.S. Army in 1944 and served until 1945.  The family moved to Lincoln in 1954 where they raised two daughters.  From 1965 to 1987, she was the Director of Nursing at Milder Manor Nursing Home.

LaVerne was passionate about service to others, and she touched many people’s lives. She volunteered at the Lied Center and Bryan Health Medical Center. She was also active in the Presbyterian church, PEO, UNL Faculty Women’s Group and the Fifty-Fifty Bridge Club, and served on committees at the Grand Lodge at the Preserve, where she resided until her death.

A celebration of life service will be held Thursday, November 29 at 11:00 a.m. at Westminster Presbyterian Church, 2110 Sheridan Blvd, Lincoln.

In lieu of flowers, memorials may be given to the University of Nebraska-Lincoln Foundation.  Condolences may be left online at aspenaftercare.com.