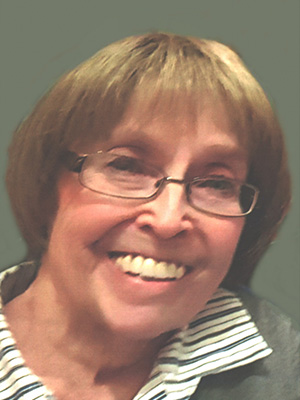 Kathleen A. Lockert passed away peacefully on October 4, 2017 at Bryan East Hospital with her family by her side.

Kathy was born March 5, 1949 in Green Bay, Wisconsin to Kenneth and Florence Stonebrook where she lived until coming to Union College in Lincoln in 1967. She graduated from Union College with an Associate Degree in 1969.

It was at Union College where she met her future husband, Stephen Lockert, and they were united in marriage in 1969 and from this union sons, Matthew (Matt) and Eric were born.

Kathy worked for Citizens State Bank and Krueger Carpet for a few years before becoming a full time mother and homemaker.

In spite of dealing with rheumatoid arthritis for four decades, Kathy displayed courage and lived an active life raising her two sons, being a loving wife, active with dear friends, walking her beloved golden retrievers in the Southwood neighborhood, and day caring her three grand children, Jordan, Eli, and Norah after school. Her sweet disposition and love for her family knew no bounds.

As a Green Bay, Wisconsin native she was, of course, a lifelong Green Bay Packer fan as well as her husband Stephen. After coming to Lincoln in 1969 she soon became a fan of the Cornhuskers and Kansas City Royals. Besides her family she will be sorely missed by best friends, Renee Lutz of Lincoln and Louise Coy of Redlands, California as well as countless others.

Kathleen was preceded in death by her parents Kenneth and Florence Stonebrook.

She will be greatly missed by her husband of 48 years, Stephen, her sons, Matt and Eric, daughter in law Christine, grandchildren Jordan, Eli, and Norah, and her brother, David Stonebrook and sister in law Bonnie Stonebrook, and her beloved golden retriever Champ. Many other nephews and nieces, friends and acquaintances will miss Kathy.

Her determination and zest for life, despite her limitations of rheumatoid arthritis, were inspiring and courageous.

Cremation. No visitation. A memorial service was held at Lincoln Berean Church’s chapel on Wednesday, October 11, 2017 at 9:30 AM. Use the north doors.

Memorials to the Capital Humane Society. Condolences to www.aspenaftercare.com.