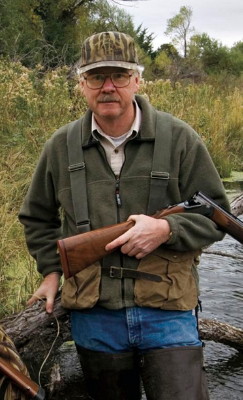 Jon was born August 10, 1947 in Genoa, Nebraska to Kenneth “Bud” and Lucycle (Truelove) Farrar. Kenneth died when Jon was four so Jon had no memories of his father. He graduated from Monroe Public High School and the University of Nebraska-Lincoln with a degree in wildlife management.

In college he began working for the Game and Parks Commission as a plant propagator. He worked at Nebraskaland Magazine for 42 years as a writer, photographer, and editor. His natural history articles and photographs were published in internationally circulated magazines and books. He was the author of several books, one of which is still used as a textbook.

Jon spent his childhood outdoors, playing along the Loop River in Monroe. In grade school he began recording the behavior and appearance of the wild animals that he knew so well. He continued this meticulous practice until his retirement and left behind a lifetime of field notebooks, all filled with first-hand observations. Jon wanted to preserve the true history of Nebraska.

For thirty years he collected information from primary sources, he located people in nursing homes after first contacting their families for permission to interview and record their stories. They in turn gave him the names of other families blessed with living histories. He gave copies of the interviews to all their families. Jon was amazed by how many of these elderly people came to life when telling their stories. One old man said he thought no one would remember him, that he would just disappear. Jon came to care deeply about these families.

He was preceded in death by his parents, brother Thomas Harry Farrar, and stepfather Lewis Hamner. Jon’s passions and interests remained constant throughout his life.

He loved the Northern Great Plains. Photographing migrating birds and “peeking into the private lives of wild animals, watching their courtship displays and seeing chicks breakout of their egg shells” he said, were the best parts of his job. During his last two years, Jon watched the animal inhabitants in his backyard wilderness. Those animals, usually called vermin and pests, are expected to yield their homes and lives to an ever-expanding city. He said he had more intimate views into their lives than he had ever gotten through a camera lens. He loved his foxes, raccoons, possums, squirrels, jays and robins. Yes, he fed them. He fed them because they were hungry and they pressed their little noses against the windows patiently waiting. They didn’t run away from him. He watched a fox eating peacefully beside a possum.

In his final years, Jon suffered from profound depression and withdrew from many people who were important to him. His family and friends are deeply saddened to lose him to this terrible illness. He is loved and will be greatly missed.

No service.  For condolences, please use the form below.