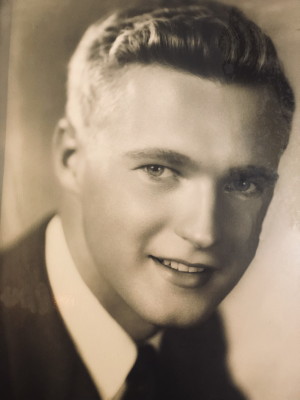 Doug was born in Cedar Rapids, Iowa to Rush S. Damuth and Jane Isold on February 6, 1928.  In 1932, Doug and his family moved to Kansas City, MO where he attended Pembroke Country Day School, from which he graduated in 1946.  He then attended Stanford University, majoring in engineering.  He was a member of the Phi Delta Theta fraternity. Upon graduation in 1950, Doug joined the US Navy.  He was a navy pilot during the Korean War serving on the USS McKean and the USS Yorktown.

While in college, Doug met Mary Jo (“Jody”) White in Kansas City and married her in 1951. Upon leaving the Navy in 1954, he became a commercial airline pilot for TWA, moving to New York City, and then a pilot for US Steel, moving to Pittsburgh, PA.

In 1963, he changed careers and became a middle school history teacher, teaching at Sewickley Academy in Sewickley, PA for 8 years. While in the Pittsburg area, Doug attended Carnegie Mellon University and received his Master’s degree in history. He then taught at Pine Crest School in Ft. Lauderdale, Florida for another 5 years.

Never satisfied for too long in any career, Doug next went through a series of jobs: insurance salesman, rug cleaner, bathtub refinisher, and home inspector.  These jobs took him and Jody all over the country from Florida, to Arizona, to East Hartland, Ct.

In 1987, Doug and Jody retired to Orlando, Florida.  Not able to stay retired for long, Doug started working for the Disney Corporation, where he worked on and off for 20 years, providing great vacations for his three grandchildren.

Jody died in 2002, and a few years later Doug moved to Lincoln, NE to be with his daughter and her family. He lived for about 5 years at Brentwood Estates and then moved to High Plains Alzheimer’s Special Care Center, who provided great care to Doug in his final years.

Doug had a wonderful sense of humor, and a true love of life. He was interested in many different things, and he always had a project. He was a skilled woodworker, making furniture and even miniature furniture; he was a Civil War reenactor; he made beer and sausages; he refinished boats; and he always loved to fly. A lifelong dog lover, Doug cherished many canine companions over the years: Tim, Satan, Tippie, Tyler, Princess, and Shadow.

Cremation.  No visitation. No service.