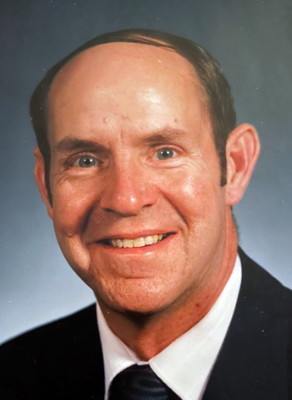 A Celebration of Life service will be held at St. Mark’s United Methodist Church chapel in Lincoln, NE at 11 am Saturday, February 5th, 2022. A private interment at Fairview cemetery will be held prior to the service.

Jerry was born the 2nd of three sons to George Anthony “Tony” Bainbridge and Marie (Stall) Bainbridge on September 16, 1941 in Lincoln Ne.

Jerry graduated Lincoln High School with the class of 1959.

Jerry was united in marriage to Charlene Schwieger in Lincoln and of this union four children were born. Debbie, Gary, Steven and Susan. This marriage later ended in divorce.

Jerry was a salesman his whole life. He purchased and ran a Sears catalog store in Holdrege from 1969 to 1987 when he sold his Sears store and returned to Lincoln where he continued to sell appliances at Sears for another 32 years for a total of 50 years with the company. He received many awards for being salesman of the month and top salesman during the years with Sears.

Jerry loved to volunteer for anything in any organization that he was a member. Jerry was very active in his churches in Holdrege and in Lincoln. Jerry had been a member of the Jaycees, Elks Club,  helped organize the Phelps County Centennial, and was a Cub Master for Pack 220. After moving back to Lincoln he volunteered his time as a tutor in math for students at Southeast Community College, delivered Meals on Wheels, volunteered at both St. Elizabeth’s and Bryan hospitals in Lincoln for many years. He held many positions in the churches  including being a lay pastor. He participated in several ministry groups and would help lead singles ministry and divorce recovery workshops. He loved playing cards, chess, and square dancing with special friend Jan Kaiser, or shuffleboard with his buddy Merle Faubel.

Jerry was preceded in death by his parents, and son Steven in infancy.

Jerry requested no flowers. Donations can be made to his favorite charity St. Jude’s or to the donors choice.