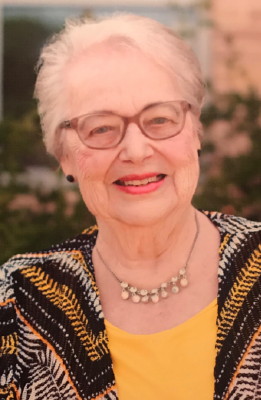 Janey Bonita Peterson, 86, went to be with her Lord on May 1, 2019 at Homestead Rehabilitation Center in Lincoln, Nebraska.

The family moved to a farm near Cozad/Gothenburg area.   The first half of her high school years were at Cozad High School.  She finished high school at Gothenburg, graduating in 1950.  Her senior year she won a superior for her singing of Ava Maria at the state contest.  Janey was not able to attend her Commencement service because of a serve case of mumps.  She attended Kearney College for two summers and taught two years at District 83.

She married Gene Peterson on March 30, 1952 at the Evangelical Free Church in Gothenburg.  To this union was born four children, Cindy, Linda, Greg and Tim.  The couple were charter members of the New Hope Church in Custer County.  Later they became part of the Evangelical Free Church in Gothenburg.  She worked as a nurse aide, and bookkeeper after her children were in school.  Her final working years were at the Gothenburg Times weekly newspaper, retiring after 37 years of service.

Singing was a joyful part of her life.  Church choir was a favorite, especially special cantatas given for the congregation.  She also sang and served in the Gothenburg Community Choir. She served as a Sunday school teacher, Christmas program director, and in many other church ministries.

Janey loved decorating her home and making it a welcoming place for all to come. Hospitality was her and her husband’s gift.  If anyone needed a meal or a place to stay she offered her home.

She really loved holidays especially Christmas.  It was the most wonderful time of year for her and her family.

Janey’s primary gift was visiting with friends and strangers alike.  She always took the opportunity to give a greeting and show she cared.  Her greatest thrill was introducing people to her best friend, Jesus Christ.  Even during the last couple weeks of her life, she shared her faith with everyone she came in contact with.

Above all else, she loved her kids and grandkids.  She followed all of them in their endeavors such as singing in choir at school, playing in the band and going to many, many sporting events. She gave them her unconditional love.

Celebration of Life service will be May 13, 2019 at the Evangelical Free Church in Gothenburg at 1:30 pm.  Memorials to family for later designation.