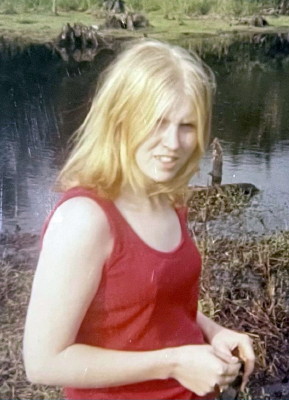 Born on November 28th, 1949, in Oakland, Nebraska, Janet (“Jan”) Kay Marr was the daughter of Wayne and Dorris (Morter) Sanderson of Lyons, Nebraska. Jan passed Tuesday, December 6th, 2022, with the window open and her three girls – her daughters, Jordana and Schawn, and her granddaughter, Drue – right by her side. She was 73.

Jan grew up on a wheat farm in Lyons, Nebraska. She graduated from Lyons High School in 1967. Shortly after she graduated, she moved to Lincoln to enroll in cosmetology school. While away at college, she wrote letters to her Air Force enlisted boyfriend, and soon to be husband.

On February 6th, 1970, Jan married the love of her life, Richard (“Rich”) Lee Marr of Tekamah, Nebraska, in a small courthouse ceremony. Shortly after they were married, she made the move out to California, to March Air Force Base, and it was there that these newlyweds made countless memories, shared new experiences, and eventually started their family together. Within this union, two children were born; Schawn Maree and Jordana Allison.

Over the course of her life, Jan explored many career paths. After trying her hand at cosmetology, she completed every history class that the local community college had to offer “just because.” For nearly 20 years, Jan worked as the Transcriptionist and Administrator at the Fullerton Memorial Hospital. However, the hospital’s abrupt closure in the 1990’s forced Jan back into the job market, and it was at this time that she decided to get her CDL and become a school bus driver. But not too long after, Jan fell into the career she was meant for – she became a Head Start teacher.

Jan happily entered retirement as a Head Start teacher, having won countless awards from various educational conferences across Nebraska for her handmade, innovative, and interactive children’s toys and books. She retired having been fortunate enough to be her granddaughter’s first teacher.

Jan was a fighter, a hellraiser, and the smartest woman in any room she walked into. Ask her about any world war and she could teach you a thing or two. Have a question about European history? You don’t need Google, just go ask Jan! And if you’re ever feeling confident about going up against her in the next round of Trivial Pursuit, I’d think again.

Jan was a proud grandma. Every inch of her home was littered with pictures of her grand-babies; ready at any moment to point at their photo and brag about a recent accomplishment to any company that walked through the door. And when she left the house, she was never without two items: a book to read, and a camera to snap pictures. A talented photographer, Jan captured hundreds, if not thousands, of her family’s memories over the years – each picture more beautiful than the last.

Her love for her children and grandchildren fueled her will to fight against her failing health for as long as she did. Jan was diagnosed with Parkinson’s disease in 2000 – a disease that stole her quality of life long before it finally took it. Prematurely taken it may have been, Jan’s life was nothing short of full.

After Jan and Rich moved back to Nebraska, they ultimately settled down in Fullerton, and started construction on their new house. During this time they lived above a local bar that was owned by a dear family friend, Jack Nelson. This bar, and friendship, became the backdrop to so many hilarious, beautiful, and heart-warming stories. A natural story teller, Jan brought these stories, and so many others, to holiday gatherings, dinner table conversations, and tough times when levity was needed.

Jan was her family’s biggest cheerleader. If her kids, or grandkids, had a game, performance, or concert, count on saving her a seat. Without fail, there she was in the stands at every; softball game (rule book in hand), basketball game, orchestra or band concert, marching band competition, little league baseball game, piano recital, award ceremony, graduation (big or small). You name it, she was there – for as long as she possibly and physically could.

And for as long as she was able, Jan carried on doing the things she loved; she bowled competitively, she went on ski trips with friends, golfed as much as possible, played board games like there was money on the line, attended concerts, went to Nebraska Volleyball games, scrapbooked, sewed, and crocheted in her spare time. She was never without a hobby or project, and always with a recipient in mind.

Jan loved her family deeply, and she was loved just the same. While she was not ready to go, it was her time, and the Lord was waiting for her. She is no longer in pain, she is back in the arms of her high school sweetheart, and her memory lives on.

She was preceded in death by her first love and first kiss – her husband, Rich Marr; her mother, Dorris Sanderson; and her father, Wayne Sanderson.