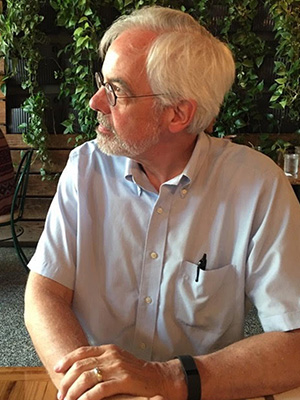 James Christopher Carmer, PhD, died unexpectedly from a stroke on September 9, 2017, at Immanuel Hospital in Omaha.

Jay spent the majority of his professional career in Lincoln, Nebraska, as a clinical psychologist until the time of his death. One of his first jobs in Nebraska was at Immanuel Hospital in Omaha.

Jay enjoyed exercising, photography, and nature. He was out for his morning run when he had a stroke. He was noticed by a Lincoln police officer who sought help. Jay’s most recent photo shoot, months in the planning, was of the eclipse over the state capitol in Lincoln. A dedicated bird watcher, his children like to tell the story that he taught them to recognize bird calls before they could speak.

Jay was quietly generous with his time and talents for family and friends. Professionally, he gave extra support to those with the greatest needs in order to better their lives and the world. He continued giving even in death, donating to the Nebraska Organ Recovery System. The family likes to think he donated his two humerus bones, hoping that his sense of humor would live on.

Cremation. No visitation. An informal memorial gathering for Jay will be on Saturday, September 16, from 1:00-3:00 p.m. at St. Mark’s United Methodist Church fellowship hall, 8550 Pioneers Blvd. in Lincoln.