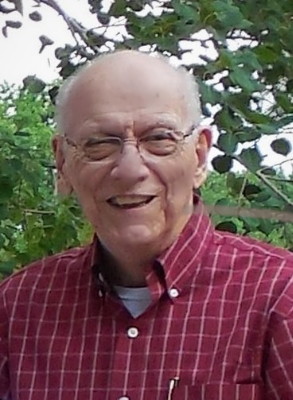 James Franklin Leiser, 94, died on Saturday, April 20, 2019, in Lincoln, Nebraska.  Though his birth certificate says he was born on February 11, he was actually born on Feb. 4th 1925 in South Bend, Indiana to Henry Hachenberg Leiser and Burnice Beth (Frye) Leiser.  He grew up in South Bend and Key West, Florida, where a first job on a fishing boat began a lifelong love of fishing.   He enlisted in the Navy in 1943, at 17, and served 4 years in the Pacific theater aboard the USS Langley as a crewman on a torpedo bomber.  He then served 8 more years in the National Guard, part of the time as a radioman on a seaplane in Panama.

After returning to Indiana, Jim took advantage of the G.I. Bill to earn a BS at Butler University. In 1950 he married Charlene Dorothy Cook from Columbus IN.  They enjoyed 60 years of marriage, and lived for most of that time in Brownsburg IN.  Jim’s career as a systems analyst for Detroit Diesel Allison computing division in Indianapolis coincided with the beginning of the common use of computers for data management by business.  He was involved in the development of Fortran (4), one of the first programming languages for computers that is still used today for scientific applications.

A lifelong enthusiast of amateur radio, he was a member of ARRL for over 50 years.  His call sign was KE9Z.  After retirement in 1980, he earned his private pilot’s license.  He was very proud of the fact that he and Charlene had flown on both the British and French Concorde on their many travels together.  After Charlene’s death, he moved to Lincoln in 2012 to be near family.

We thank the splendid staff of CountryHouse Residence III and AseraCare hospice for giving Jim such wonderful companionship and support.

Memorials may be sent to the Boy Scouts of America Cornhusker Council Scout Reach program to help support the opportunity for underprivileged youth to participate in scouting.  One of Jim’s lifelong regrets was that he was never able to be a scout.

After cremation, private burial will be in Indiana.  Condolences may be left using the form below.