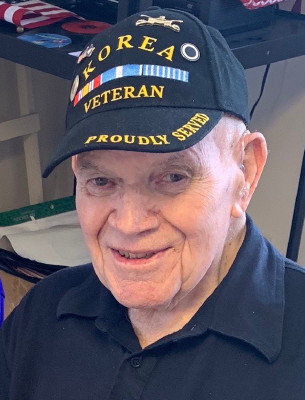 Ivan Boettner was born in Bennet, Nebraska February 10th, 1931 to Earnest and Bernice (Holland) Boettner and passed quietly into rest May 4, 2020 in Lincoln, Nebraska. Ivan married Doris Jean Nelson on July 28, 1951.  They resided in Alvo, Nebraska for 63 years until moving to Lincoln in 2016.  Doris and Ivan were blessed with 5 children, 15 grandchildren, and 35 great grandchildren.  Ivan cared for and supported them all.

A Korean War veteran, Ivan started his civilian career with the Burlington Northern railroad, after which he became the Water Superintendent for Alvo, also working closely with area farmers as a semi driver, tractor driver, mechanic, and general consultant about everything mechanical and some things that weren’t. Holding his military service close to his heart, Ivan participated in an honor flight May 2019 to Washington DC & toured the memorials, especially the Korean Memorial. A true jack of all trades, Ivan was indeed one of a kind. His version of multi-talented experience is rare, and places his memory at the forefront of the thoughts of all who knew him.

Ivan was preceded in death by parents, a son Douglas, a brother Clyde, a sister Dorothy & her husband Bob Brehm, and a nephew Michael Brehm.

Memorials to family for future designations.

May he rest in peace.