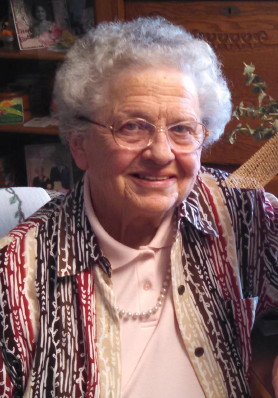 Hulda attended District 17 country school and Peace Lutheran Church at Plymouth.  Household and farm chores filled her early life.  As a young lady, her passion for nurturing led to caring for new families and continued all her life anytime a child was near.

Their life together, spent in Blue Hill, NE, centered around church life at Trinity Lutheran, active in Altar and Flower Committees and Ladies Aid, and business life owning and operating Scheidings Appliance.  As a homemaker, Hulda loved cooking, baking, sewing and quilting.  Garden produce made for bountiful canning.  They both enjoyed weekly bowling leagues.  Harvey preceded her in death in 2008.

In lieu of flowers, memorials may be made to the family for future designation to church and charities. Checks can be made out to Sandra and mailed in care of her to Aspen Cremation Service, 4822 Cleveland Ave., Lincoln, NE 68504.

Condolences may be left using the form below.