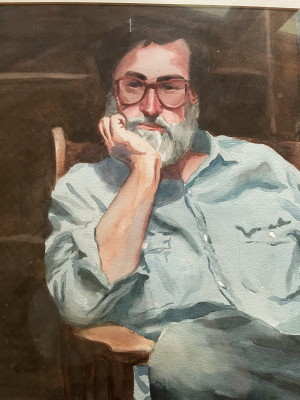 Howard Kaye died suddenly at home on 8 October 2022.  He was born in Los Angeles to Harriet and Arthur L. Kaye on 26 December 1942. Howard grew up climbing the backyard avocado tree with his little sister, Lorri.  He graduated from Stanford University, received a PhD from Columbia, and began teaching at Cornell University.  He married Fran in 1972.  “She wanted no fetchings. His arms would be her necklace and her belt, the final fortune of their desire.” Deciding he didn’t really like teaching English, he returned to his first love, art.  He moved to Nebraska in 1977, where he taught calligraphy and watercolor at Southeast Community College and developed a career as a watercolor painter.  He showed his work in more than 300 regional and national juried shows and was a member of both the Burkholder Gallery and Impact Nebraska Artists, as well as a signature member of the National Watercolor Society and Watercolor USA.  He was also a fine potter and illustrator.

Howard was an impressive cook who for many years opened his kitchen and his home to people who were homeless, recently released from prison, or otherwise vulnerable.  A quiet, self-contained man, he acted not out of religious conviction or idealistic belief, but rather knowing that in a society of pernicious inequality, generosity was the only decent response.

Celebration of life at a later date.  Memorials to the Burkholder Project, 719 P St., Lincoln, NE 68508 or to Nebraska Public Media.

“And in the isolation of the sky at evening, casual flocks of pigeons make ambiguous undulations as they sink, downward to darkness, on extended wings.”