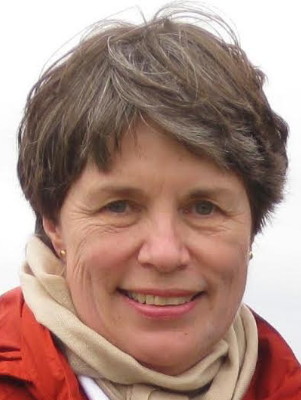 Ginny (Virginia Lindquist) Gross died May 26, 2018 of a heart attack at her home in Lincoln, Nebraska. She was 68.

Ginny was born on June 15, 1949 to Dale and Ruby (Johnson) Lindquist and raised on their farm east of Cambridge, Illinois. She was active in 4H and the Lutheran church. After graduating from Cambridge High School, Ginny moved to the Quad Cities to attend Augustana College and write for the Moline Dispatch. She then moved to DeKalb, Illinois to earn her journalism degree at Northern Illinois University, where she met and married Peter Gross, a fellow student.

After early work in Chicago, the couple moved to Iowa City, Iowa to pursue graduate studies. Ginny earned a master’s degree in comparative education from the University of Iowa while directing their foreign student admissions. Her work took her to Romania, Germany, Korea, and Malaysia. Ginny and Peter’s son, Eric, was born in 1978. Their marriage ended in 1981.

In 1987, Ginny married Fritz Hudson, minister of Iowa City’s Unitarian Universalist Church, and gave birth to their daughter, Sally, the following year. In 1991, ministry took the family to Phoenix, Arizona, where Ginny became Volunteer Coordinator at John C. Lincoln Hospital. She delighted in southwestern history, culture, and terrain. In 1998, ministry returned the family to the Midwest, as Fritz was called to serve the Unitarian Church of Lincoln, Nebraska. Ginny continued her work as Director of Graduate Admissions at the University of Nebraska, then Women’s Services Director of the YWCA, and Training Coordinator of Lincoln Literacy. She retired in 2013.

In all her homes, Ginny championed schooling, sports, and cultural exchange for her children and all children. She was a passionate cook, gardener, art lover, and Chicago Cubs fan. She volunteered as an active church member, a leader at Lincoln’s Fresh Start Home for Women, and a language tutor for Iraqi refugees.  Ever proud of her Illinois roots, Ginny took great joy in managing the Lindquist family farm and joining her Cambridge High School classmates aboard their 50th reunion float in the homecoming parade last fall.

Ginny is survived, beloved, and dearly missed by Fritz, Sally, Eric and his wife Amanda, and their twin boys, Asher and Emmeric.

Memorial worship is being held Friday, June 29, at 4 pm at the Unitarian Church of Lincoln,  Nebraska. Memorial donations are invited to Planned Parenthood of the Heartland (5631 S. 48th St. Suite 100, Lincoln, NE 68516).  Condolences may be posted at www.aspenaftercare.com.