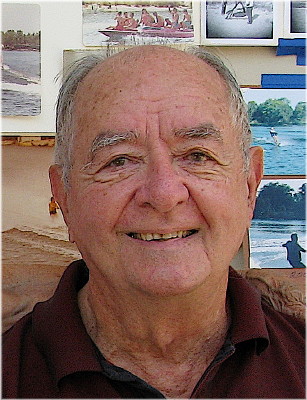 Jim McCabe was born Darrell James McCabe in Mondamin, Iowa to David and Daisy (Pippitt) McCabe on April 29, 1927. At a very early age he realized he was not bound to the life he’d inherited, and his instinctive curiosity led Jim on a remarkable journey that ended with his passing in Lincoln, Nebraska of natural causes on November 24 at the age of 93.

He enlisted in the U.S. Army during World War II and served in the occupying force in Belgium and Germany, where he parlayed his GI rations into gifts for refugee children. Jim returned to the States and enlisted the GI Bill to become the first in his family to attend college. Alphabetical order sat Jim McCabe next to Marla Marx at a freshman survey class at the University of Nebraska, and they went on to be married for 66 years.

The Marx’s helped Jim pursue a degree and career in dentistry. As he prepared to raise a family, Jim decided he needed the reliability of a paycheck and left private practice to become a professor of dentistry at UNL’s Dental College. He would later confess he had no idea what he was doing the first day he stood before a class, but it turned out teaching was his natural calling. He would teach his dental students about more than dentistry, and went on to become both a student and teacher of many subjects. Dr. McCabe became legendary for his class Alternative Ways of Feeling Better offered through UNL’s innovative Centennial College in the late 1970s. He continued practicing dentistry as the on-staff dentist at the Whitehall Home for Children for 30+ years, and led a staff of volunteer dentists serving the Winnebago Indian Reservation in Nebraska. In his spare time he was a freelance interior designer for Eno’s Upholstery for 30 years.

Curiosity and creative thinking also made Jim a shrewd businessman. Having discovered expensive German comfort sandals on a trip to California, Jim opened Lincoln’s Footloose & Fancy in 1975, and with Marla’s devoted salesmanship it became one of the most successful Birkenstock retailers in the country. Noticing the college town lacked a legitimate coffee house, he opened the much beloved “The Coffee House” on P Street in 1987. He showed a similar sense of foresight and opportunity when playing the stock market.

Jim was a lifelong traveler, who fell in love with the mountains as a ranger in Rocky Mountain National Park, and celebrated his 50th birthday with a solo trek across India. He was also an avid and adventurous chef, who could talk about food for hours.

Known variously as Jim, DJ, Doctor McCabe or Pop, he will be remembered by many simply for fascinating conversations and loud laughter going late into the night, often at the family’s cherished lake house at South Bend.

He is survived by his wife Marla, sons Jeff and Casey (Mary Widdifield), grandchildren Olivia and Henry McCabe, cousins Janice Callahan and Nick Bean, and dog Mimi. The family asks that his memory be honored by sharing Jim’s curiosity, kindness, generosity and integrity, and that any memorial be sent as a donation to the Lincoln Humane Society.

The family would like to thank the staff at The Monarch House hospice for their kindness and professionalism.

Celebration of life to be held at a later date.