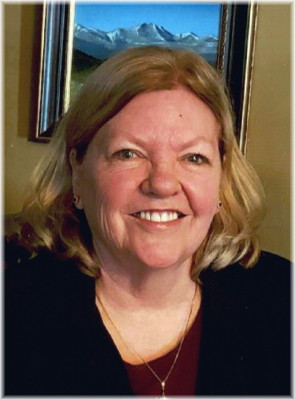 Delynn was born on Jan. 16, 1959, in Alliance, Nebraska to Dell and Karen Clark of Alliance. She attended kindergarten in Alliance, moved to Lexington with her family, the family later returned, where she graduated from Alliance High School in 1977.

She attended Chadron State College, this is where she met the love of her life, Rodney Gene Cain. Delynn and Rodney were married at the First Christian Church in Alliance on June 8, 1979. They joined Rodney’s parents in their western wear business in North Platte in 1980 where they worked until the business was sold in 1999. Three children were born to this union, Jesse, Jace, and Crista, they raised their children in North Platte. Delynn and Rodney were able to spend 42 wonderful years together.

Delynn was blessed to be able to spend her time watching her kids play sports. She was a member of the Little League Baseball board and Platte Valley Girls softball board. She kept score at many baseball and softball games. She was able to coach many of her daughter’s sports. Traveling to watch her kids at baseball, softball, basketball, volleyball and tennis tournaments gave her joy. She loved spending time with her grandsons Jax, Brayden, Rogan and Callum.

It was always Delynn’s passion to be a nurse and she was able to go back to school and graduate as an RN with their son, Jace in 2010. She attained her BSN in 2017 from UNMC. She spent ten years as a RN and spent her last few years traveling as a labor and delivery nurse where she met so many wonderful people.

Delynn is survived by her parents, Dell and Karen Clark of Alliance; husband, Rodney of Lincoln; sons, Jesse (Elizabeth) Cain of Lincoln and their sons Rogan and Callum; Jace (Sussan) Cain of Corpus Christi, TX their sons Jax and Brayden; daughter, Crista (Colbin Beals) Cain of Hazel Park, MI. Brothers JR (Julie) Clark of Wellfleet and their children Wyatt, Jaden and Madison; Doug Clark (Isaac Cabrera) of Denver, CO; and Jake (Kerin) Clark and their children Kadra and Kyler of Yoder, WY.; as well as many loved aunts, uncles, cousins, and friends.

She was preceded in death by her in-laws, Gene and Marianna Cain.

A family gathering will be held at a later date.

In lieu of flowers, memorials to several charities have been established in Delynn’s memory. Words of comfort may be sent to The Cain family at 4822 Cleveland Avenue, Lincoln NE 68504.