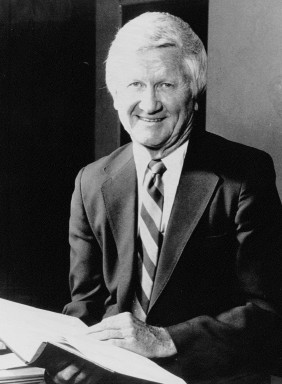 Downing was a trial lawyer.  He loved the courtroom and thrived in the adversarial climate.  He practiced civil and criminal law.  He defended clients as a court appointed attorney, including a few murder cases. He was a strong believer in the U.S. constitution, civil liberties, and the right to a fair trial.  He was paid whatever clients could afford, including in-kind payment of lawn mowing, baby-sitting, repairs, etc. He never gave less than his best to any client and judging from the remarks of those present at his retirement party, his best was among the best in the state.

Vicki Johnson, presiding district court judge, perhaps summed it up best when she noted that it was her fervent wish that every attorney who appeared before her exhibited the same decorum, dignity and knowledge of the law which Mr. Downing displayed when he was in the courtroom. Orville Coady, retired district court judge noted that under Downing’s dignified demeanor was a razor sharp mind and a steel sense of determination.

Downing was born in Lincoln but moved to Superior with his family in 1941.  His father Robert was an attorney who was chief counsel at the State banking office.  When a shift in political winds at the State level saw a change in administrations, he lost his position.  He was friendly with some Superior businessmen and listened to them when they suggested he relocate to the city to practice law.  He purchased the law practice of Frank Stubbs, who was retiring and hung out his figurative shingle.

David attended Superior High School and graduated with the Class of 1947.  He enrolled at the University of Nebraska – Lincoln. Met and fell head over heels for Nancy Louise Jensen of Fremont, who dropped out to put him through school. They married in 1951. Admitted to the UNL College of Law,  received his J.D. degree in 1953. He had been a member of the Reserve Officers Training Program at UNL and went on active duty with the United States Army.  He was commissioned as a second lieutenant.  He applied for and was accepted into the Judge Advocates General’s (JAG) corps.  Upon completion of his training at the University of Virginia, he was promoted to first lieutenant.  He served most of his time at the United States Army disciplinary barracks at Ft. Leavenworth, Kansas.  He represented individuals on the defense and served as a prosecutor.  Upon his separation from the army in 1956, Downing moved to Denver where he passed the Colorado bar exam and was admitted to practice.  In 1959 he joined his father Robert H. in practice in Superior and established the Downing & Downing law firm.

Downing was the only attorney to serve as president of all three major legal organizations in Nebraska:  Nebraska Association of Trial Attorneys, 1973-74; Nebraska State Bar Association, 1987-88; and Nebraska Criminal Defense Attorneys Association, 1993.  He was also an admiral in the Navy with the great State of Nebraska.  His one foray into seeking public office was unsuccessful when he was the democratic nominee for attorney general in 1964. Campaigning with incumbent democratic governor Frank Morrison on the coattails of LBJ, the last democrat to win the presidential vote in Nebraska, he was soundly defeated by the republican incumbent in 92 counties, but proudly won his home Nuckolls county.

He has served as a mentor and inspiration to generations of Nebraska attorneys.  He has been in partnership with Randall Alexander since 1981.  The Downing building is the former Lincoln Telephone and Telegraph building in Superior.

One of his proudest accomplishments did not take place in a court of law but rather in the fields near Broken Bow.  In 1971, then Governor JJ Exon invited Downing to be his guest at the Nebraska one box pheasant hunt.  The Nebraska team roster was full, but Exon, in a gesture of altruistic generosity, offered Downing to the Oklahoma team which was short a hunter.  Downing proceeded to lead the Oklahoma team to victory which earned him an honorary colonelcy in the Oklahoma Governor’s office.   Governor Exon quipped, “The Oklahoma victory was all arranged ahead of time for Oklahoma to win.  We even gave them a hunter par excellence in David Downing.  Hopefully, Oklahoma will be as kind to us when we see them on Thanksgiving Day.”  Of course, Nebraska went on to defeat Oklahoma in the game of the century the following week.
[Thanks to reporter Marty Pohlman and publisher Bill Blauvelt of The Superior Express for permission to borrow from their 2014 feature story.]

Celebration of Life on Saturday, December 7, 2019 at 1:00 p.m. at the Unitarian Church of Lincoln, 6300 A Street. Memorials to family for later designation. Condolences may be left using the form below.