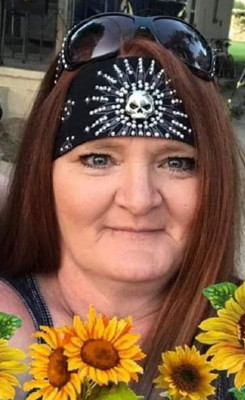 Darla D. Peterson, of Fremont, Nebraska passed from this world Friday July 5th, 2019 after battling cancer for several months. She was born February 13, 1969 to Wayne and Dawn Muff in Grand Island, Nebraska, grew up in Lincoln and attended North East High School. She was a long time valued employee at 3M in Valley, Nebraska. She often spoke of her love for her job and her co-workers. She loved riding her motorcycle and spending time with her beloved friends and family.

Darla is survived by her father, Wayne. Her children Jade and Mark Fowler and Garret and Kelli Lacey. Niece, Logan Muff. Brothers Andrew(Traci) Bolish and Gary Muff. Her greatest joy in life was her seven grandchildren; Mack, Elisabeth, Joshua, Annalyse, Mason, Benjamin, and Sloan. Darla was loved by many Aunts, Uncles, Cousins, Nieces and Nephews. She was preceded in death by her mother, Dawn Muff.

A Celebration of Life will be held in her honor on August 3rd, 2019. Please contact the family for details. The family also asks that in lieu of flowers, a donation of any value be made to The Monarch Hospice in Lincoln, Nebraska where Darla passed.

“If my words did glow with the gold of sunshine

And my tunes were played on the harp unstrung

Would you hear my voice come through the music?

Would you hold it near as it were your own?”