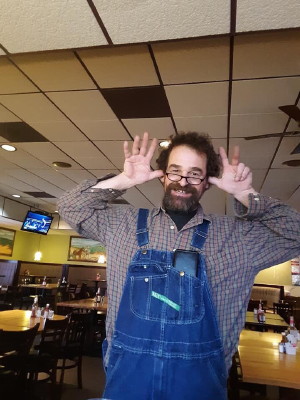 Clarence was unfortunately taken to soon on 07/10/19 in a head on collision at age 57. He was driving the vehicle with his mother Janice, whom also was taken. While details are still unknown, it is with great sadness the family not only lost one but two staples of greatness.

Clarence was born September 15th, 1961 to Janice and Clem in Lincoln, Ne. Clarence moved around some as a child but eventually planted his roots in Lincoln where he raised his daughter Jamie and granddaughter Chloe. He recently had moved to Milligan to help his mom Jan take care of the property she owned. In the recent months he was so excited with the progress of the house and his rat rod project.

Clarence spent his days making someone’s trash his treasure. He was able to see the potential of all things around him. He admired the beauty in the world and always found the time to enjoy the small things. He spent a lot of his free time with his Princess, Chloe. Their bond was unbreakable.

Clarence believed anything that made him happy was worth enduring, even if only for a minute. He lived in the moment and never took his time with the ones he loved for granted. The unfortunate loss of a remarkable man has impacted the lives of many. It was very unlikely you’d see him without a happy go lucky smile on his face. He’d light up a room just by entering it.

The family asks that you join them for a fundraiser on Saturday August 3rd, 2019 at Pub bar behind Burger King on 48th and Holdrege from 1-4pm. There will also be a Celebration of Life on August 4th, 2019 in the Auld Pavilion at Antelope Park in Lincoln starting at 10am. Breakfast will be served. If you are unable to attend the fundraising event but would like to make a donation you can make it out to the Memorial of Clarence Patzloff. These are not formalwear events. You can reach out to Jamie at jpatzloff@gmail.com if you have any questions.