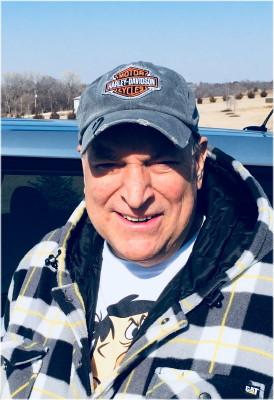 Born in Aurora, Chris spent his early years in Colorado with his father – Dennis, his mother- Twyla and brother -Troy.

During his teen age years, Chris moved to Lincoln, Nebraska with his mother and step father Martin Terry where he attended South East High School and Southeast Community College.

Chris returned to Denver after college and Chris’s son, Ryan Peterson was born in 1988.

Upon returning to Lincoln with his family, Chris began working at Burlington Northern. He worked for over 20 years as a diesel machinist in Sheridan, Wyoming and Lincoln, Nebraska.

Chris had many hobbies and interests including working on cars, fixing up guitars and building model cars. He loved go cart racing and spent many weekends racing and working on go carts with his brother, Troy and his son, Ryan.

Chris loved all things Harley and Ford Mustang. He was an avid Sprint car racing fan. His favorite World of Outlaws driver was Steve Kinser.

Chris, along with his brother, mother, step father and son, was a loyal Bronco fan. He never missed a game.

Cheryl Stice lived with Chris in South Lincoln. Chris, Cheryl and his mother, Twyla, enjoyed going to garage sales and resale shops looking for toys. Chris spent his free time working on his many hobbies and projects including fixing toys he found for under privileged children.

Chris enjoyed fishing. At local rural ponds he fished with friends and in Missouri with his mom and stepfather and girlfriend, Cheryl.

Chris had a great sense of humor. He always had a joke ready and loved to make people laugh. Chris Lee Peterson had a good heart and will be missed.

Chris is survived by his son, Ryan and daughter-in-law, Amanda, his mother and step father , Twyla and Martin Terry, his father, Dennis Peterson. His brother and sister-in-law, Troy Peterson and Aeloa Delany and his girlfriend, Cheryl Stice and her children and grandchildren.