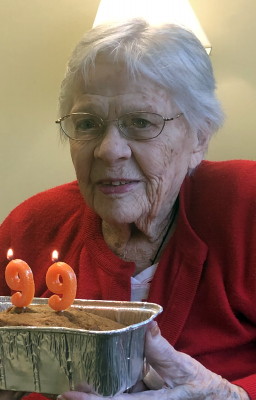 Irene Holton, age 99, passed away peacefully on December 21, 2021 after a brief illness.  She was born on September 11, 1922 to Hans and Svanhild Jacobsen in Brooklyn, New York and was the eldest of three daughters. She attended Bay Ridge High School and graduated with the class of 1940.  While on vacation at a dude ranch in upstate New York, Irene met rodeo cowboy Warren G (Doc) Holton and they were married on July 31, 1949.  After riding the rodeo circuit for several years, Doc and Irene settled and made their home in Phoenix where she lived for the next 60 years until her health began to fail and decided to move to Lincoln, Nebraska where she could be closer to family.

Irene made a career of being a produce buyer where she worked for several brokerage houses over the years becoming pioneer in her field.  In later years, she worked as a bookkeeper for Phoenix area truck brokerages until she retired in 1985.

She was active in the Eastern Star, Sons of Norway, Daughters of Norway and various other fraternal organizations that promoted her Norwegian heritage.  She was multilingual speaking English, French, Norwegian, Swedish and Danish.

Irene is survived by her daughter Jamalee (Duane) Roach, grandchildren Jennifer and Matthew, numerous nieces, nephews and family friends.  She was preceded in death by her parents and siblings.

She requested no services.  In lieu of flowers, donations can be sent to your local humane society.