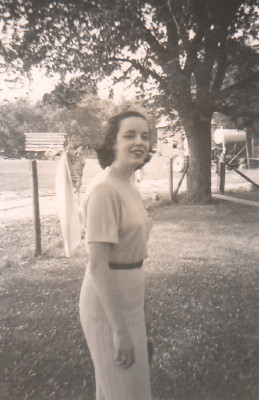 Carol Ilene McDermand was born to Glenn Francis and Florence Foulkrod McDermand on January 1, 1934 in Lincoln, Nebraska. A proud graduate of Lincoln High School, Class of 1951, she lived in New York City and Omaha before returning to Lincoln to complete her degree in Home Economics at the University of Nebraska. She joined the Unitarian Church, where she was introduced to Larry Lee Brown. After a whirlwind courtship, they married on February 24, 1961.

A member of the Home Economists in Homemaking organization, Carol was a talented seamstress, a lover of cats, and an avid (bargain) shopper. In addition to being a self-employed dressmaker, she worked at Fritz’s House of Fabrics and at some of Lincoln’s most revered department stores, including Gold’s and Miller and Paine, where she was the bridal consultant.

She was preceded in death by her parents and sister, Wynona Crossgrove. She is survived by Larry, her husband of 58 years; daughter Amy Knox Brown and son-in-law Brad Koontz; daughter Darcy Knox Brown; granddaughter Skylar Melbye-Ethington (Mathieu) and great-grandson Jaymin, along with nieces and nephews across the country.

Please fill out the form below for condolences.