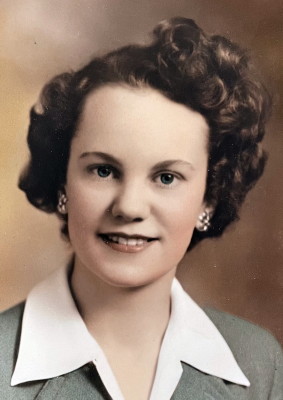 Beverly Jean Richards was born February 24, 1926 in Oakland, Nebraska.  She was the eldest of six born to Sidney L. Wallerstedt and Helen D. (Anderson) Wallerstedt.

Jean’s early years on the farm helped hone her domestic skills where she learned to cook and prepare meals for the hired hands and take care of her five siblings, Donald, Barbara (Swanson), Merrily (Pennington), and the twins, Patty (Miller) and Tom.  She walked to country school, District 62 in Burt County, the same country school her father and his siblings attended while living on the same third generation farmstead.  Through her early high school years, she lived in the nearby town of Oakland with her grandparents, Hulda and Nels Anderson, during the academic year.  Later, when her younger brother Don began high school, the two of them made the daily journey to and from the farm by Model A Ford.  She enjoyed school as a cheerleader, acting in drama club and singing in choir there and in church. She loved to attend dances and baseball games popular at the time. Jean worked as a secretary for the new hay mill and for a local law firm. She graduated high school in 1943.

Growing up during the depression and WWII, Jean became familiar with not only preparing meals for the hired hands, but like many of her generation, became an excellent seamstress. She attended University of Nebraska-Lincoln focusing on music.  Jean had a beautiful singing voice and was called upon to sing at weddings for her high school girl friends and many funerals.  She also mastered the Betty Crocker Cookbook and it is still used by her children for family favorites.

When she returned home from college to the farm, Jean brought coffee to the linemen working at the end of the lane, adding new lines to the countryside.  Jean decided the handsome foreman (Jeff) was someone she would like to get to know. Next time she asked the whole crew to come inside for coffee. Jeff was older by five years and although they knew of each other, this recent activity began their courtship. They celebrated nearly 70 years of marriage.

Jean and Jeff were married October 5, 1947 and had their first of three children, Lamont, while living in Miller, South Dakota where they began their wedded life together.  The family moved back to Nebraska and added Kent and Laurie to the family. The Richards family combined farming and commercial work in the Oakland community for three quarters of a century before moving to Lincoln to be closer to their children, Lamont and Laurie.  As it was in Oakland, Jean and Jeff were part of their kids’ social lives. In Oakland, Jean was a Girl Scout leader, assisted with Boy Scouts and Cub Scouts and was a lifelong member of the First Evangelical Lutheran Church and loved participating in PEO. The Richards’ home was always active with music and family gatherings, something that continued after moving to Lincoln, including her delicious Sunday dinners.

Over the years, Jean loved traveling to Pennsylvania and California to visit her grandsons Harrison and Cameron, sons of Kent and Alison. While visiting, Jeff would busy himself with projects around the house and Jean helped prepare the grandson’s favorite meals and desserts.

Jean passed peacefully surrounded by her loving family on January 17, 2023. She was preceded in death by her loving husband, Merl Jeffrey Richards, her parents and her younger sister, Barbara Helen Wallerstedt Swanson. She is survived by her children, Lamont Richards (Nan Schweiger), Kent Richards (Alison), and Laurie Richards (Dan Worth); grandsons Harrison Richards (Mariam), Cameron Richards, and great grandchildren, Margaux and Julian Richards (Harrison and Miriam), her siblings and many cousins, nieces and nephews.