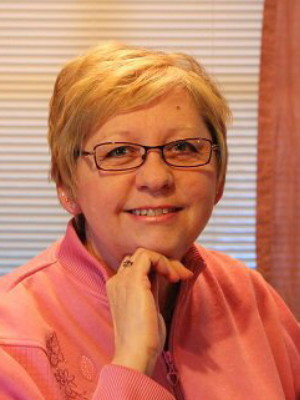 She was born January 31, 1950 to Melvin and Marilyn Vosler. Beverly grew up in the Ashland area, graduating from Ashland High School in 1968. That fall, Beverly married Larry Sims, and to this union three daughters were born. In 1997, Beverly married Howard Rippe. Bev and Howard enjoyed taking rides on Howard’s Goldwing and traveling together until his death in 2002. Beverly worked and retired from Goodyear in Lincoln, Nebraska. Beverly was an avid Barbie and miniature collector. She enjoyed attending yearly doll conventions and spending time with her doll club friends. In 2010, Bev and her partner Tom moved into the Cotner Center Condominiums. While living at the Cotner Center, Beverly became President of the Board and helped with office duties and scheduling events for the center. She enjoyed playing scrabble and playing her guitar with friends as well. Bev also enjoyed participating in a ukulele group called the LUG Nuts. Family was very important to Bev. She always tried to attend her grandchildren’s events and activities and traveled to Arizona in the summers to spend time with her grandson. She enjoyed crocheting and baking.

Beverly fought cancer three times. She lost her battle to Pancreatic cancer after fighting for 14 months, however she stayed optimistic through it all.

A Celebration of Life was held on Thursday, February 22 from 4pm to 7pm at the Cotner Center Condominiums at 1540 North Cotner Blvd in Lincoln, Nebraska. Memorials to the family.
Funeral Home assisting is Aspen Mortuary, 4822 Cleveland Avenue, Lincoln, NE 68504. To view an on-line obituary or email condolences please visit Aspen Mortuary’s website at www.aspenaftercare.com.