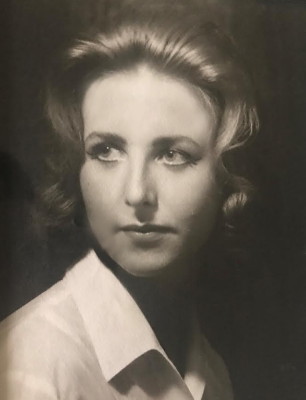 Anita Dreimanis passed away, February 26th, 2021 after a long battle with Parkinson’s, during the Covid-19 Pandemic, at the age of 80. Anita was born Oct. 22, 1941 in Cesis, Latvia. She fled on a boat to Germany with her Mom in 1942, after the Russian Army had captured her Dad.  When her Dad managed to escape, he ran to a cousin in Germany where he thought Anita and her Mom might be. The village had been blown up. He found them later in disbelief, in a nearby village buying bread on the street. They eventually wound up in a displaced persons camp in Augsburg where they remained for the next 7 years. In 1950, after WW2 was over, they secured passage to the USA with a sponsor who would help them with their status as refugees. They docked in New Orleans after 30+ days at sea in a crammed boat where she had made of a friend of a crewman from Africa who shared with her the first candy bar she had ever had and a canned peach, which she at first thought he had given her a raw egg. By this time Anita spoke many languages fluently but had not yet learned English. They quickly began learning English on their train ride to Scottsbluff, NE where they had all been hired as farmhands for a year. After that they moved to Lincoln, NE where there was a good sized Latvian community and she attended Lincoln High School and graduated with honors.

She met her husband, Haralds, who had moved to Lincoln, NE from the East coast after his family had also fled Latvia. They were both members of the Latvian Evangelical Lutheran Church and members of the Latvian fraternity and sorority.  They got married and had two children, bought a big old house on Peanut Hill in Lincoln, NE and filled it with dogs and cats. Eventually they parted ways, but shared a friendship of a sort with each other as they continued to raise their children.  This is when Anita really began her career, even though prior to marriage, she had been a social worker in Philadelphia. She wanted to give back and worked in marketing and fundraising capacities in the non-profit sector. United Way and NETV were particularly special to her in her heart always, long after she left working for them. She also had created her own marketing company, where she worked for a while with her daughter Alisa. She would slow business down for a while when she did something else, and any time she saw a need or something of interest then she would reignite the business again until she retired. In retirement, she worked for many years at The Gallup Poll, where she made many wonderful friends, and often snuck in her chihuahua Taco, that would quietly be resting in her purse at her feet while she worked.

Anita’s biggest joys in her life were her two granddaughters, Marina and Neva. Anita spent several decades driving her granddaughters to and from dance where she reveled in watching them grow and learn and dreamed of how she had wanted to be a ballerina. Her other joy in life were her pets. She spent her life rescuing cats and dogs and taking care of them as if they were her family members.

Anita was preceded in death by her parents, Janis and Karla Stakens (Zuberts) and her ex- husband, Dailis Haralds Nikolajs Dreimanis. She is survived by her son, Ronalds Pauls Dreimanis and her daughter Alisa Ina Kushner (Dreimanis) and her two grandchildren, Marina Max and Neva Pearl Kushner. She is also survived by many dear cousins, near and far and by many wonderful friends.

Celebration of Life in the future. For condolences, please use the form below.