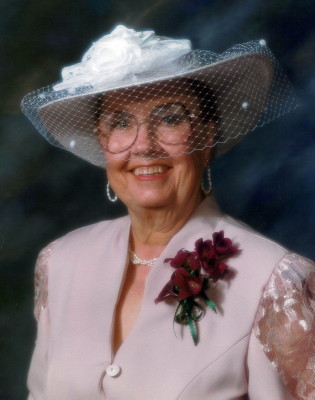 Alice Lorene Petersen Cherry, 93, passed on to her next adventure on March 20, 2022 in Lincoln, Nebraska. She was born in Mason City, Nebraska on October 27, 1928 to Carl and Alice Petersen, the ninth of 11 children.

Alice grew up in Mason City attending school and graduating from Mason City High School and completed Normal Training to become a teacher. She taught at a one-room school house and it was during this time she met her husband, Glen Cherry. The couple married in Valley, Nebraska June 17, 1951 and had three children. Alice and Glen parted ways on December 20, 1976.

Alice wore many hats during her lifetime and she loved wearing hats both literally and figuratively. She was well known for her hats at church where she was a lifelong member of the United Methodist Church. Alice was a teacher, homemaker, Activity Director at Sandhills Manor in Broken Bow, and an early childhood teacher in Bedford, Texas.

Throughout her life, Alice was a staunch follower of the University of Nebraska-Lincoln athletic programs, especially football and a fiercely loyal St. Louis Cardinals baseball fan, a love she inherited from her mother. She moved to Maryland with Todd and Sarah in 2012 and became a faithful and loyal Washington Capitals hockey fan and loved attending the games where she was a popular fan, often bringing treats for the staff and ushers in her seating area.

Alice returned to Lincoln, Nebraska in November 2019 where she resided at Independence House Coddington. She loved the staff and her home while being able to visit with children, grandchildren and even great-grandchildren. She was protected from the pandemic by the caring and attentive staff and remained in good physical health while her memory often took her back in time to times when she anchored a girls relay team that beat the boys. She would often remember times she loved to run. She was a staff favorite as her onery side and love of a good joke or prank was often on display.

Alice was preceded in death by her parents, sisters Cora, Gladys, Eunice, Ruth and Thelma, brothers, Gilbert, Jesse, Albert, Carl and infant brother, brothers-in-law and sisters-in-law. She was the last surviving family member of her generation.

A memorial service will be held at 10 a.m., Saturday, March 26, 2022 at Bethany Christian Church, 1645 N Cotner Blvd, Lincoln, Nebraska. Inurnment will follow at a later date.

Memorials to the family for designation to some of Alice’s favorite places.